﻿﻿A few people have asked me why I have not posted lately. The truth of the matter is that things in my present life have been rather chaotic. My nine-to-five had always been a bit grueling, but as of late, it has started to become downright discouraging. I have always believe that it is important to have a work-life balance but lately I have not been doing a good job of enforcing such an attitude on myself. As I explained to Friend Blue yesterday, “The Man is getting me down.” In this challenging time, I realize how lucky I am to have supportive friends and loved ones. I am lucky enough to have people around me who tolerate hearing the same vent repeatedly knowing that one day I will get past my personal drama. Alas, it is time to abandon my pacifier, loosen my grip on the blankey, dry those baby tears and move on. With that said…I am back with a new story. Enjoy and thank you for being a friend…you know who you are.

Now, where did we last leave off? Ah yes, I went ahead and blurted out my love for Mr. Right. After all that preaching about letting him come to you, I was the one who broke that ice. There is an important distinction in this scenario. Things were quickly growing serious between Mr. Right and me. Our dates and conversations were unlike any I had experienced in the past, and Mr. Right constantly made comments about the future and how much he cared for me. I could sense that “love” was already between us…although the words had not been uttered. By saying them myself, I had nothing to loose. Mr. Right could have thanked me instead of reciprocating, but at least I would have been able to understand that we were not on the same page. When you are feeling something so strong and absolute, I say…go ahead and let it out. Own your feelings because when you are in that deep, you deserve to know whether the other person is on the same page.

Shortly after the love outing, Mr. Right and I decided that we would book our trip to Ireland. It would be my first time in Europe and I was excited to be sharing the experience with Mr. Right. We boarded a plane to the Emerald Isle five months later. It was February and we left from JFK airport in New York. The airplane was over three hours late to arrive but thankfully there was a pub at our gate. We enjoyed dinner and some drinks while anxiously waiting to depart the USA. Eventually we got on the plane. Mr. Right had some magical sleeping pills; he popped them and went right off into sleepy land. There I was, wide-awake and nervous about my first trip across the pond. I have never been a huge fan of air travel and let’s get serious people, they didn’t even turn off the lights in the cabin. It was an OVERNIGHT flight! 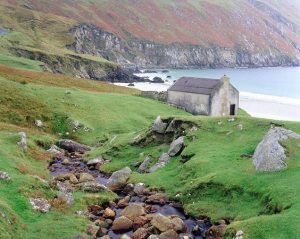 My anxiety built and I started to fear I would be up all night. The time difference in Ireland would have us arriving around 7:00AM Irish time. Our plan was to rent a car and drive south from Dublin to our first bed and breakfast in Arklow. It would be a two to three hour drive and I did not want to be a basket case on the first day of our trip. I always do this to myself…sense the need to sleep so urgently that sleeping becomes impossible. I took my blanket and lame mini pillow and prepared to force myself to rest. Chair reclined, pillow on shoulder, and blanket over the head like a navy blue ghost on Halloween. Hellooo, remember the cabin lights?? Gloriously, I began to sleep. I have a faint memory of the flight attendant calling my name and telling me to upright my ghostly self into my seat and out of the aisle space. Is this even possible, could she have looked up my name on the flight register? I might never know.

As we landed in Dublin about six hours later I clocked about four hours of shut eye. By the time we secured our rental car and GPS (most necessary when traveling in Ireland), it was about 9:00AM. On so little sleep, I was practically incoherent. Mr. Right was giddy and excited which only made me want to bang my head against the dashboard. I could not even find amusement around the whole “wrong side of the road” phenomenon; only fear of dying in what felt to me like a driver’s seat with no control. Mr. Right was visibly disappointed. He had a vision of an joyful arrival and fun beginning to our adventure. The fact that I was uneager to start the first leg of our journey seemed selfish. Alas, I did not put on a happy face.

We arrived and the B&B and checked in; I literally went right to bed. Mr. Right continued to be dejected and took my exhausted state a bit personally. After all, the planning and effort, he was expecting a little more out of his fun loving girlfriend. I could not understand why my need to sleep was a personal affront to him. Maybe I was just being fussy and over sensitive. After some sleep, the first day of our trip would turn around. I would wake up refreshed and ready to take on tourism abroad. I would be a fun travel companion and turn this trip around. I would…zzzzzzzzzzzzzzzzzzzzzz.

Have a great weekend…and welcome back to my blog! ~ MB

One thought on “Mr. Right…the Trip to Ireland”